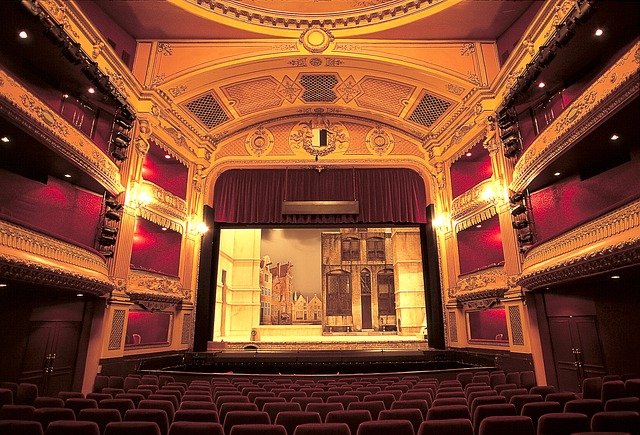 Everyone should take a theatre class. It is the most important class, course, or any other form of education I have ever taken in my life. I first took theatre classes in high school. I soon fell in love with it and took some form of theatre class for 5 years straight. I ended up being in a few productions, both on stage and behind the scenes, as well as being the lead for a play. So I would say I am somewhat familiar with how theatre can change one’s life in more ways than one, although there is so much more I yearn to learn about the art of performing. Exploring your talents on stage can lead to an infinite amount of possibilities, so I’ll just illustrate how theatre challenged, matured, and expanded my horizons.

One of the most obvious and important skills one can learn from theatre is public speaking. To perform well on a stage, no matter how big or small a stage, one must speak with appropriate enunciation and correct pronunciation. In addition, acting on stage challenged me to speak in front of others, and many at that. Research has shown that public speaking is one of the biggest fears of humanity around the world. I too used to be afraid of speaking in public. Even just standing on stage in front of an audience would be nerve-wracking. I was timid and afraid of others hearing my voice, but theatre helped me grow comfortable in front of others, both known and unknown to me. This has shown to be beneficial in multiple aspects of my life. From helping me make new friends, to being able to speak in front of large crowds, and make good impressions to my employers and clients. On top of all that, theatre also presents a way to speak in multiple ways, whether it be different accents, new vocabulary, or even something similar to learning a new language. Like taking a public speaking class, theatre helps one challenge their fears to public speak, but unlike a public speaking class, openly offers more possibilities to hone one’s own self.

Possibly the greatest teaching I have gotten from taking theatre was learning how to deal with my emotions. It offered me not only an analysis of how others and I express our feelings, but also a safe space for me to vent my pent-up emotions. In order to play a character and react to another character’s actions and words, one must find their character’s motivation, attitude, and “why.” Why did the character do this? Why did the character say this? Why would the character react this way and not that way? These all link with one’s emotions. Although acting is in fact acting, the emotions are derived from the actors’ experiences and pain. Throughout history, we see that theatre was indeed a way to release strong emotions, through catharsis. Productions today follow the same blueprint as long ago. Both the performers and audience get a taste of this so-called catharsis and hopefully realize how they feel. Musicals like Dear Evan Hansen and Next to Normal bring awareness to the lack of priority of mental health in society today. Tragedies written centuries ago are still performed today and dive deep on dealing with grief, corruption, and morality. Theatre has no limits into what emotions it can touch and bring out. Similar to how you can empathize with characters in a book or movie, theatre demonstrates the concerns of others. In fact, theatre takes it one step further by forcefully putting the actor into another person’s shoes, pushing them to better understand someone else’s feelings and situation.

Lastly, theatre opens one’s mind to the endless possibilities that life has to offer. By opening up our heart on stage, the mind can’t help but follow. Theatre can and has told millions of stories. The emotions may be real, but the stories aren’t always so factual. This isn’t done to trick the audience into believing the fake. But just like our emotions need to be released, our minds also deserve some form of cleansing. There’s an endless stream of stories and ideas. Theatre provides a way to make those dreams a reality. It has opened me to new passions, which include writing and reading. I now can’t get enough of the countless narratives created by wonderful artists. I also struggle to keep my own little storylines in my head and write them out to record and possibly share with the world. My imagination is no longer bound to what I see but to whatever I want to be, or not to be. In addition to performing and illustrating stories, being different characters from your own self foster you to see new perspectives and grow receptive to opinions and thoughts, of course within reason. Theatre brings together people of all ages, races, and genders as well as stories about different cultures, various hardships, and marvelous adventures.

If there happens to be a course on theatre at your school or an improv class in your area, I encourage you to give it a shot. Theatre has changed my life for the better and can do the same for you. No matter your age or stage in life, whatever you learn in theatre can be applied to your situation. It can help you use your voice, create more intimate relationships with others, and expand your imagination. Now, I’m not saying that theatre will automatically make you a professional public speaker, emotionally intelligent, and a genius. But with time and effort, theatre can lead to growth as a person that many seem to ignore. At the end of the day, you don’t even have to take theatre too seriously. If it’s not exactly your thing, just have fun. I’m not asking you to be a professional and be on Broadway, but I would love to see you exploring the world of theatre with a smile. Even if you have doubts, I can assure you that when I am standing on stage, I know there’s a power that can only be felt through the art of theatre.